I’m Sarah, a self-employed gardener who has recently started working at The Pheasant. 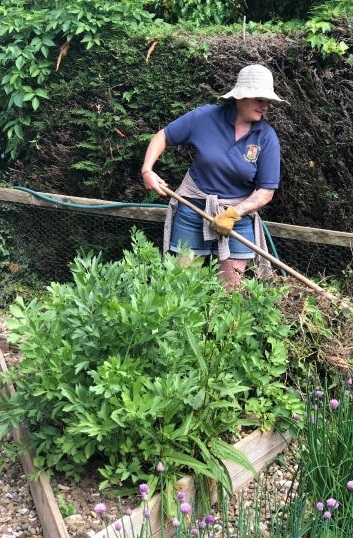 In addition to pruning the roses, the fig and the fruit bushes, and having a general weed-round, I have been concentrating on the vegetable garden. Not being exactly sure what was previously grown in the beds last year, I am starting from scratch, with a crop rotation system beginning next year: This is important when growing vegetables, as it reduces the build-up of certain pests and diseases.

In addition to the three permanent asparagus beds, I have allocated two beds to legumes, in which I have sown a few varieties of runner bean seed, mangetout and two types of climbing french bean. I did a second sowing a fortnight later to extend the harvest, but if you have space, you can continue staggering the sowing until the last recommended sowing date which will be stated on the seed packet.

There is also a bed specifically for brassicas in which I have sown broccoli and three varieties of cabbage in drills, which will be thinned out in due course, and planted in their final positions. Two varieties will be ready for harvesting around the same time, with the third being ready between November and March. The broccoli requires more patience, as this won’t be ready until April/May 2021! At least these will provide a bit of interest in the vegetable garden through the winter months while the rest of the beds are sleeping.

There is one bed allocated to salad crops, with lettuce, spring onions, radishes and beetroot having been sown, the seedlings of which will be thinned out if necessary, or in the case of the lettuce, transplanted to around 9 inches apart, where they will grow on until being ready to cut. As the Asparagus season is short lived, I will make use of these beds by planting the lettuces in there, being very careful not to disturb the asparagus crowns, which thankfully, are evident.

I have also sown two types of courgette seed, (‘Defender’ and ‘Orelia’), which I have started off in pots. These will be ready to plant out when they get their first true set of rough leaves. From what I gather, many people have lost their plants this year due to frost, having planted out too early. Courgette and Marrow plants love to be planted in soil enriched with well-rotted manure: I also know of people planting them directly into an old muck heap with fabulous results!

I am very interested in companion planting, which involves growing certain plants alongside certain crops to help avoid the use of chemicals; something which Chef Peter is keen to progress in line with the Pheasant’s sustainability commitment. These plants can be sacrificial or just help by masking the smell of the tasty vegetable. They can also attract beneficial insects which can predate on the pests.

The flowering chives are a real picture in the vegetable garden at the moment, and in addition to being pretty, these too can be a very useful companion plant, helping to discourage carrot fly and aphids.

I know growing vegetables can be a challenge at times, and I often hear people state that it’s easier to go to the farm shop, but it’s so satisfying to harvest your own, which you have nurtured and know exactly how it’s been grown. There is also a sense of achievement and pride when seeing it at its final destination…. on the dinner plate!

We use cookies on our website to give you the most relevant experience by remembering your preferences and repeat visits. By clicking “Accept All”, you consent to the use of ALL the cookies. However, you may visit "Cookie Settings" to provide a controlled consent.
Cookie SettingsAccept All
Manage consent

This website uses cookies to improve your experience while you navigate through the website. Out of these, the cookies that are categorized as necessary are stored on your browser as they are essential for the working of basic functionalities of the website. We also use third-party cookies that help us analyze and understand how you use this website. These cookies will be stored in your browser only with your consent. You also have the option to opt-out of these cookies. But opting out of some of these cookies may affect your browsing experience.
Necessary Always Enabled
Necessary cookies are absolutely essential for the website to function properly. These cookies ensure basic functionalities and security features of the website, anonymously.
Functional
Functional cookies help to perform certain functionalities like sharing the content of the website on social media platforms, collect feedbacks, and other third-party features.
Performance
Performance cookies are used to understand and analyze the key performance indexes of the website which helps in delivering a better user experience for the visitors.
Analytics
Analytical cookies are used to understand how visitors interact with the website. These cookies help provide information on metrics the number of visitors, bounce rate, traffic source, etc.
Advertisement
Advertisement cookies are used to provide visitors with relevant ads and marketing campaigns. These cookies track visitors across websites and collect information to provide customized ads.
Others
Other uncategorized cookies are those that are being analyzed and have not been classified into a category as yet.
SAVE & ACCEPT